Flower in a Pot #1 - Rick Rack Piping in the Binding

Now that I've completed the quilting on Flower in a Pot #1, I decided that it needed a little something fun for the binding.  I thought about using a blue fabric to do the binding, but decided that would be too much.  I though about using Susan Cleveland's Piping tool to make some piping to put in the binding.  But honestly, I was feeling lazy so I didn't want to spend the time making the piping.  So what to do?

My friend Liz loves rick rack.  She encourages us to buy some every chance she gets.  So I thought about that and realized that rick rack would be really fun on this little quilt.  I went down to Joann's and found that they had lots of colors of rick rack.  The one that went best with this quilt was a lovely dark turquoise blue that matched the accents on the pot.  Four other packages also came home with me.  I'd only planned for two, but who can resist rainbow or gold rick rack?

I started by marking a line where I wanted the edge of the quilt to be.  I then aligned the edges of the rick rack to that line.  You can see below that I pinned every other hump.  (what do you call the up and downs in rick rack?)  I then stitched about an eighth of an inch inside my marked line to hold the rick rack on.  This is not the final stitching line.  This stitching will end up inside the binding once I sew it on.  It's the basting stitching to hold the rick rack on.  I did not use basting sized stitches however because I didn't want the rick rack to fall off.  I did the same thing on the opposite side of the quilt. 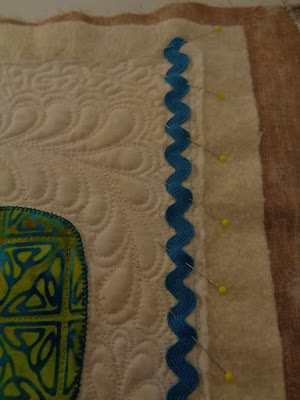 When I went to sew the remaining pieces of rick rack on I was very careful about how to align the corners.  I wanted to make sure that they looked nice. 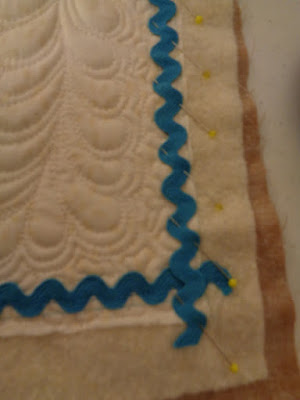 Here's what it looked like once I was finished sewing all four pieces of rick rack on. 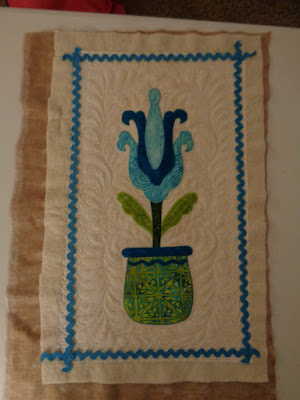 And here is the final small quilt once I'd trimmed and sewn the binding on.  I couldn't be happier with the way it turned out.  I'm glad I left a little room around the edge of the feathers so that the rick rack didn't cover the feathers. 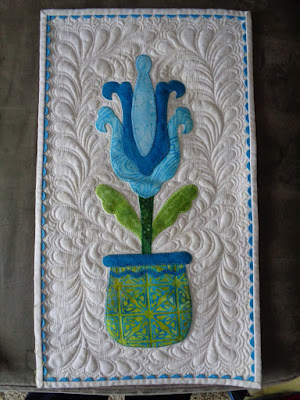 Email ThisBlogThis!Share to TwitterShare to FacebookShare to Pinterest
Labels: rick rack in the binding