Standing Out: off in color, shiny
Use a thread that is slightly off in color (lighter makes it pop more than darker) OR use a thread that is an accent color in the fabric instead of the main color.  It also really makes things pop when you use a really shiny thread.  There are many, many threads that have great shine.  I like Fufu Threads, Deco-Bob by WonderFil Threads, Glide by Fil-Tec, and just about any rayon thread out there.

Here is a block that I did after gaining this knowledge.  I used it to make my choices. 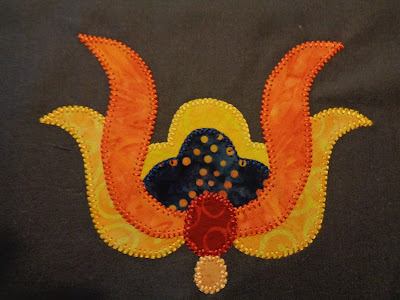 The first pieces I put on when building this block are the outer petals and the accent piece (top) on the middle petal.  In this case, they were both yellow.  I knew that I wanted the top piece to have a thread that didn't stand out, so I used Gutermann polyester thread because it doesn't have a lot of shine.  The other yellow pieces that had more print I knew I wanted to use the darker shade of yellow so the thread stood out more.  I also chose a shiny thread to make them pop.  I used Madeira 40 weight Rayon Thread.

Then I added the dark blue piece with the yellow and orange dots.  If I'd used a yellow or orange thread they would've popped those colors.  However, I really wanted the piece to be blue.  If it had been orange the orange thread would've run into the orange petals and created a line connecting them which I didn't want to see.  If I'd used yellow it would've bled into the top yellow accent piece which again wasn't what I wanted.  So I settled on blue.  I used Fufu Thread which has a nice sheen to it and was really, really dark blue.

Then I added the orange petals.  I knew I wanted them to stand out.  There is a slight variation in color to the batik so I went with the darker of the orange and used Deco-Bob by WonderFil threads which has a nice sheen to it.  I am happy with the results because the slightly darker color of the thread pops out which is what I wanted it to do.

Then I added the two dots.  I stitched the red dot in Deco-Bob by WonderFil threads because it was shiny and slightly off in color which makes it stand out.  The dot was a challenge because it was a pale peachy-orange color which is hard to find.  I used a Glide by Fil-Tec thread that I had because it was the only color that complemented the fabric at all.

Now you know why I chose the threads I did!  Happy appliqueing!