When making this table runner I realized an important lesson.  When you're working with a large snowflake and you pull all the paper backing off your snowflake it's extraordinarily good at sticking to itself and distorting.  It was quite the challenge to get it back into symmetry and stick it to my fabric.  I should've put the original pattern on the light box to help line it up but I was being stubborn.  You can see from the picture below that the center of the snowflake isn't quite symmetrical.  It looks a little squished.  The blanket stitch helped with this, but after messing with it for about 10 minutes I decided that it was either cut a new one and put it on a different way or deal with it.  I opted to deal with it. 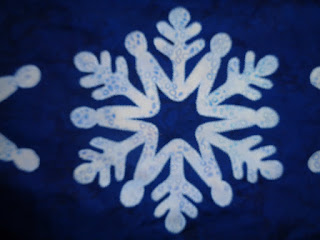 To combat this problem I decided to pull off only 2 points of the outer snowflake, stick them down, and then pull and stick as I went to finish putting the snowflake down on the fabric.  This method worked much, much better. 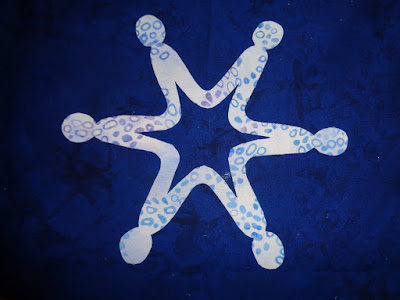 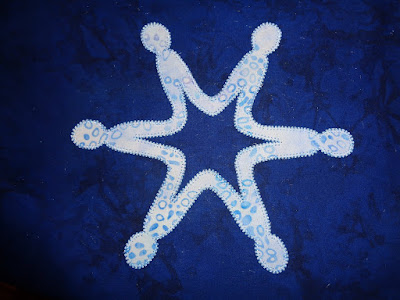 I decided that since the fabric I used for the snowflakes ranged from turquoise to sky blue to lavender I needed to pick a color that wouldn't clash.  Since sky blue was the most predominant I decided to stick with that color.  I used a Glide 40 weight polyester by Fil-Tec to do my double blanket stitch.

In the two pictures above you can see the snowflake with and without the stitching.  I love how the double blanket stitch really adds an extra design element to the applique.  It also makes it look finished to me. 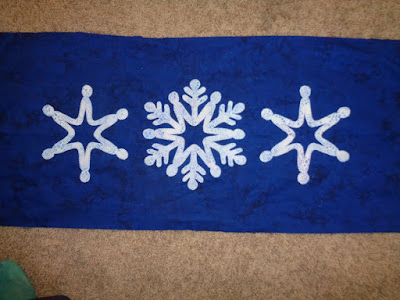 Here is the finished top.  As I was working on the last snowflake I had a funny thing happen.  I was stitching around it and I ran out of bobbin.  I now know that one bobbin of Glide thread can stitch all the way around these snowflakes except for this much: 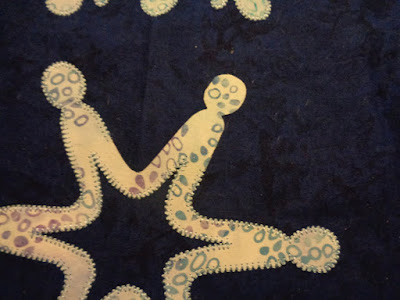 I hate it when that happens....
Suzy