What Color Should that Dot Be?

I love playing with fabric, but Block 2 gave me some trouble!  I had picked out the main four fabrics, but couldn't figure out what colors the dots should be.

Here are three variations of the large dot:

I started with the dark pink with purple spots, but you can't really see it because it blends in too much. Then I tried the light orange that looks like a leaf.  I like the color, but the pattern makes it too busy. So I finally settled for this last option, a light orange.

Now it was time for the small dot below: 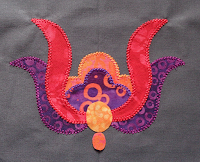 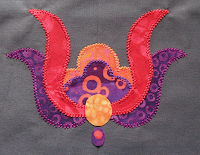 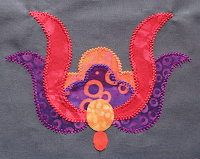 I stated with the purple with a pinky-colored dot, but the pink dot stands out a lot and it's not where I want the focus of the block to be.  Then I tried the light orange dot that is the same color as the top orange fabric, but it seemed too pale.  So finally I settled for a darker orange dot which help tie in the red fabric.

Now it was time to stitch! 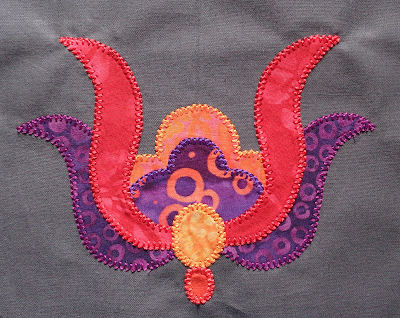 Block 2 was blanket-stitched with Glide thread by Fil-Tec except the red.  The red is a FuFu machine embroidery thread a friend once suggested.  It is not as silky as the Fil-Tec.  The texture is much more bumpy, however, and it looks almost metallic in the finished product.  It was fun to use and I want to try it again.  The rest of the colors I own in this thread are blue....I see a blue flower coming up!

I also decided to use a pinky-purple thread to outline the outside pieces instead of a dark blue like the background of the fabric.  It was blending into the dark gray too much and I wanted it to stand out more.  The pinky-purple thread did the trick.

Posted by Websterquilt at 4:00 AM